The Battle of Fessealair

I was supposed to be running a face-to-face French Wars of Religion game in the shed of war this weekend.  However, three days before the game was due I tested positive for Covid-19... Damn!

Not to be deterred and suffering from what might be described as only the symptoms of a bad cold, I offered a remote game to those rejects that were due to play - Lee, Ray, Steve and Surjit.

That's how we ended up with a fictional French Revolutionary War scenario set in 1796 using Volley and Bayonet rules.  The figures used were my 6mm MDF collection from Commission Figurines.

I will be using the full movement in the rules.  So, with cavalry moves of 20 inches things should zip along on 4 feet by 6 feet table.  However, I anticipate moves will slow once the forces engage.

The Battlefield
Two views of the field of battle 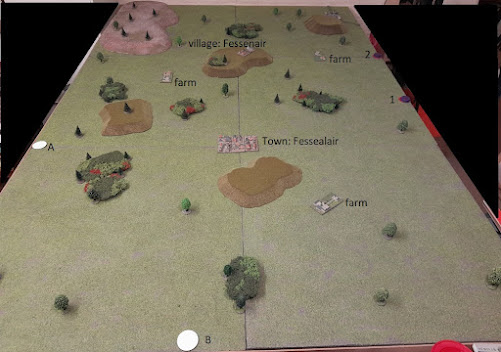 Only infantry in skirmish or open order may occupy woods.
The town may be occupied by one regiment.
Villages and farms may be defended by one skirmish stand or detachment.
The individual trees are just decoration.
Hills will not impede movement in this game.

Background
The Austrian army is retreating across northern Italy.  General Massena has been given the task of trying to cut the retreat, bring the Austrians to battle and defeat the enemy in detail.  Beaulieu is aware of the French intention.  Nonetheless, they are both surprised to have encountered each other close to the town of Fessealair.

The Austrians have taken some knocks to their morale but are still a force to be reckoned with.  They have been seen arriving at points A (Beaulieu - Steve) and B (Vukassovich - Surjit).
The French division led by Massena (Lee) will march on at point 1 and Augereau's (Ray) division at point 2.
Everything starts off the table and will march on.  Each commander may determine the order in which the brigades march on.  Though they will do so in order on the army roster.
The Armies
Apologies for the blurred images 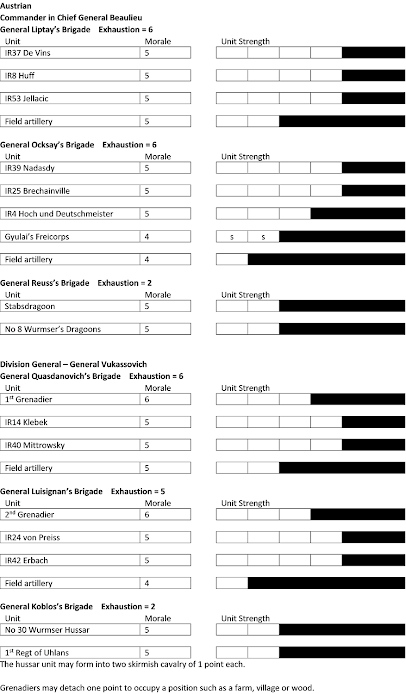 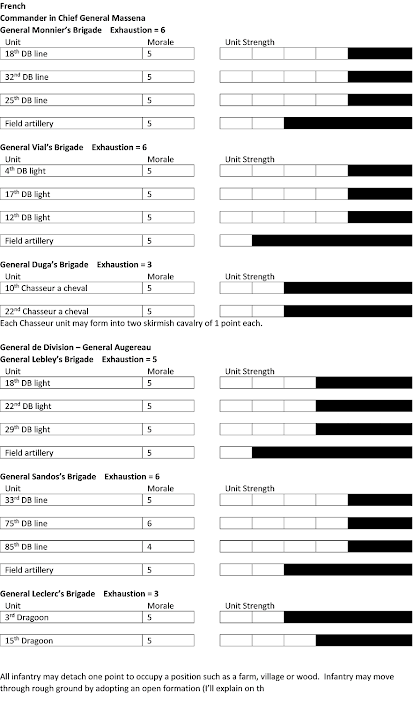 Victory Conditions
Either the first side to have half their brigades exhausted and morale collapsed, or whoever has the most exhausted and collapsed brigades at the end of play loses.
The Battle
The French won the initiative the initiative in an opposed dice roll.  Massena rolling poorly, but Beaulieu unable to capitalise.  This could well sum up Beaulieu's luck throughout the game.
The French moving first marched on rather cautiously.  Neither Massena nor Augereau using their full movement (which is a massive 16 inches for infantry), but opting to obtain secure positions.
The Austrian command seemingly starting out with the intention of wrapping around the two flanks.
Turn 2 saw the French resist extravagant moves and consolidate their lines.  The most offensive posture were the dragoons sent out on the far flank to threaten and/or pin the Austrian right.

Beaulieu and Vukassovich, marching further, are slowly getting into place.  Quasdanovich's brigade appearing to position itself on the Austrian left in preparation for some offensive action. 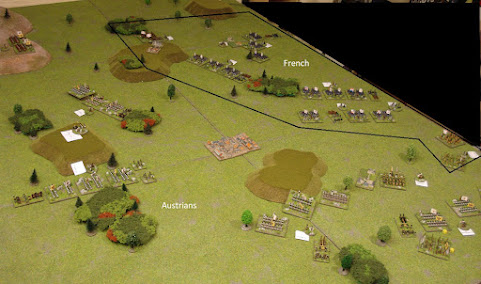 Ocksay's brigade is sent to obtain the town of Fessealair and deploy in the centre and at the junction with Vukassovich's division to its left. 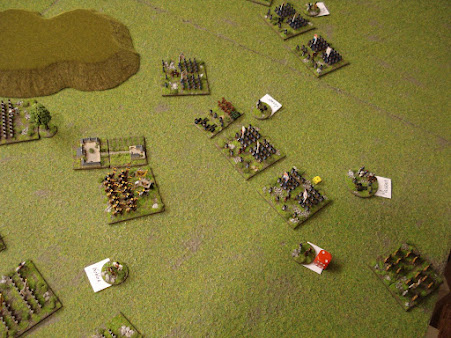 Quasdanovich's response is to launch a regiment in a charge and the grenadiers to present strongly on the flank.  Both have a sobering effect on the French, with damage to both Monnier's infantry and to Duga's Chasseur a Cheval regiments. 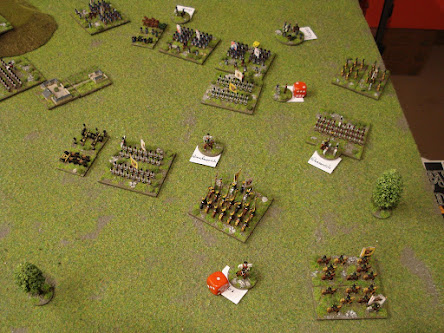 On the French right/Austrian left, Leclerc's dragoons were let off the tether and ripped into the Austrian dragoons.  With the Wurmser dragoons destroyed the Stabsdragoon retreated to safety.  Nonetheless, Reuss's cavalry brigade was now exhausted and unfit for offensive action.  In response, Beaulieu deployed two infantry regiments from Liptay's brigade to protect the flank. 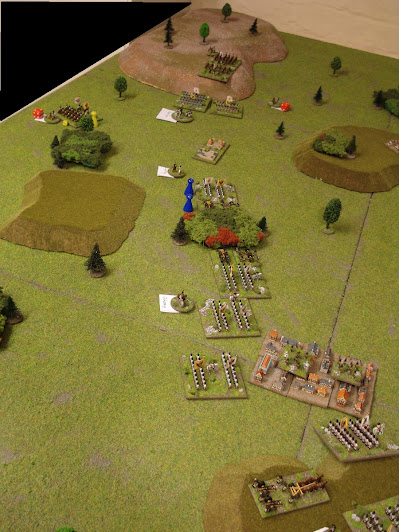 Meanwhile, the Austrian centre is solidifying. 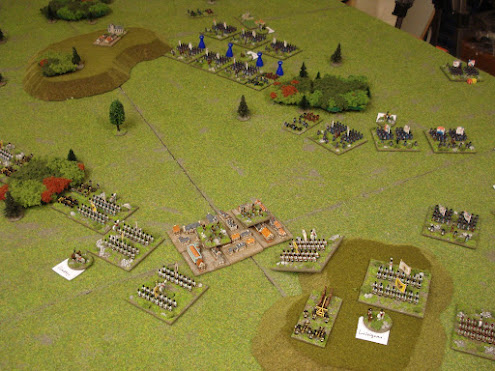 After being bloodied by the Austrians, Massena decided to pull Monnier's brigade back and redress the lines on the French left.
However, Vukassovich smells blood and thinks that the French left flank and Monnier's division is fatally damaged and ripe for taking.  Quasdanivich's division and Koblos' uhlans are thrown at the faltering French. 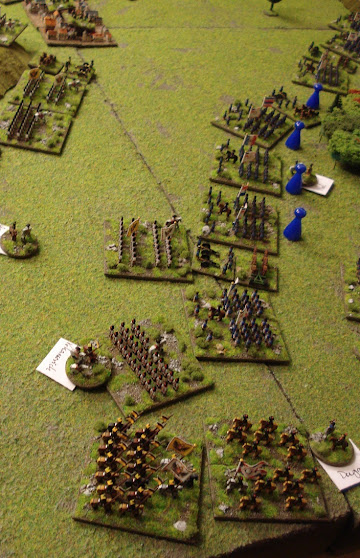 ... However, Vukassovich's hopes are disappointed.  Whilst Monnier's losses leave his brigade on the brink of exhaustion and potential collapse, Quasdanovich's infantry are showing signs of running out of steam.  Plus, Koblo's cavalry division's morale collapses with the destruction of the lancers. 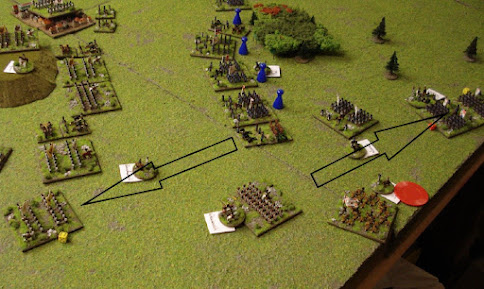 With day light running out, Massena and Augereau consolidate their line and adopt a defensive posture. 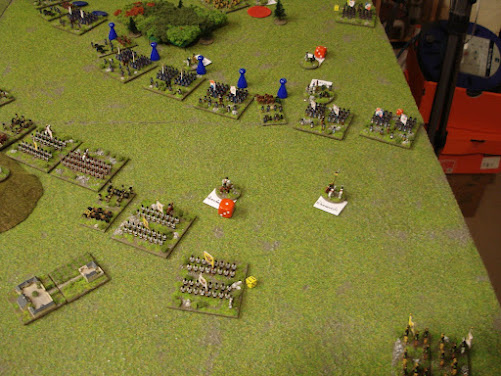 However, Beaulieu and Vukassovich throw their forces forward to crack the French position and, importantly for Vukassovich, to open up the French left flank. 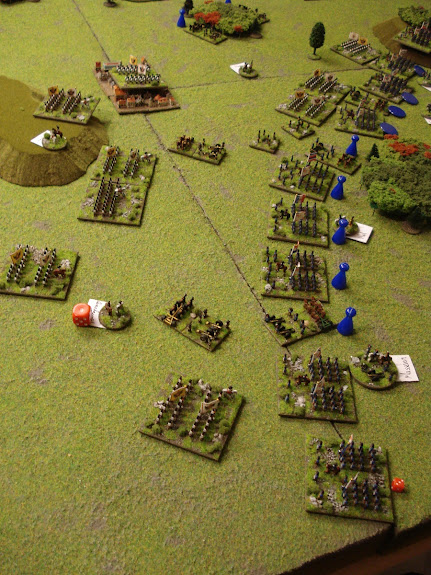 Alas, just as the Austrians started with indifferent dice, so they ended!  They were thrown back along the line.
However, Quasdanovich's brigade finally exhausted Monnier's brigade.  But became exhausted in the process.  In the centre, Ocksay's brigade was mauled and their morale swiftly collapsed. 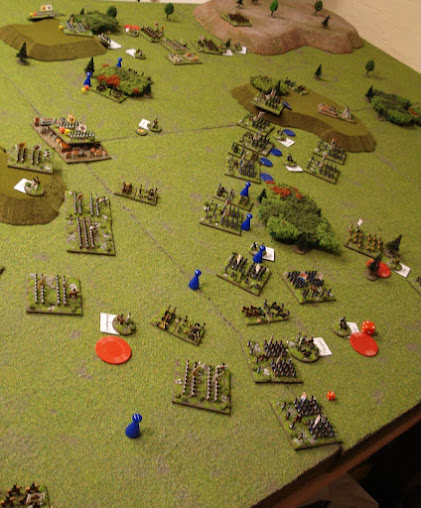 The French line held.  As the sun set on the battlefield, the Austrians retired with 2 exhausted and 2 collapsed brigades.  The French fared better with two exhausted brigades and none that saw their morale collapse. 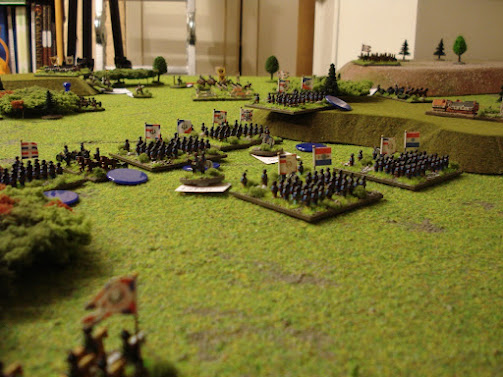 Conclusions
Everyone said they enjoyed playing the game and liked the rules.
I was surprised to hear that everyone felt that playing with the full movement rates worked on my table.  I did wonder whether there would be some comments and criticisms about the abstracted nature of many of the mechanisms.  However, everyone stated their appreciation of the scale of the game and found the abstractions worked in allowing players to act as corps/army commanders.
I asked about how these rules worked for them as a remote game.  Especially as the rules are essentially IGOUGO in structure.  Again, the response was positive with an expression of preference over other rules they have played with me remotely.
Thanks to the rejects for helping this be an enjoyable umpiring experience.
at November 21, 2022 11 comments:

A collection of walled farms from Brigade Models.  I've done a simple paint job on them.  I'll have to look at making some fields, vineyards etc. to attach to these rural workplaces.

They will see use with my 2mm French Wars of Religion, as well as with my 6mm SYW and French Revolutionary Wars.

Looking at the figures and the buildings, they all seem nicely in scale.  For obvious reasons 2mm wargaming is the exception to my usual practice of using buildings one scale smaller than the soldiers.  One has to maintain some sense of proportion... ahem, my apologies!
I've got another playtest of my rules in a couple of weeks.  So, one or two farming households may witness the engagement!
at November 01, 2022 19 comments:

To add to my wooden (MDF) 6mm Revolutionary Wars French army, I've painted these as skirmishers.

The figures are from Commission Figurines.  I love their charm.  Plus, at £2 for 96 infantry, it exerts a charm in these more financially challenging times.

As with all small figures, don't look too closely.  I should comment that from a gamer's position looking over a table, you wouldn't immediately know that these are MDF and flat.

And there you have it.