Following on from the Battle of Les Aveugles (see previous post) the Rejects played a follow up remote Austrian War of Succession game.  In the previous battle the Austrians retired and the French have been pursuing the Austrians.  Little do the French know that the Austrian commanders (Ray and David) were able to rendezvous with a reserve infantry brigade.  The imperial forces have now moved to find, what they hope, is favourable ground to manoeuvre onto and teach the French a lesson.
This is the context of this remote game.  Which has at its heart the desire to try out the blinds and cameras on a bigger table.
I had to use a different and below par camera.  So apologies for the blurred images.
The Players
French: Lee, Surjit and Steve
Austrian:  David and Ray
The Armies
These are the same as in the Battle of Les Aveugles except casualties are carried over (allowing for stragglers and wounded to rejoin the fray).  Plus, the Austrians have an extra infantry brigade.
See lists below:
Austrian
French
Victory Conditions
These will be based on Koenig Krieg victory conditions of a test based on the number of brigades at 50% or less. Or when a side chooses to retire. Whichever comes first.
Initial Deployment
Both sides sent their deployment to me prior to the evening.  The following photo shows how the blinds were set up on the table. 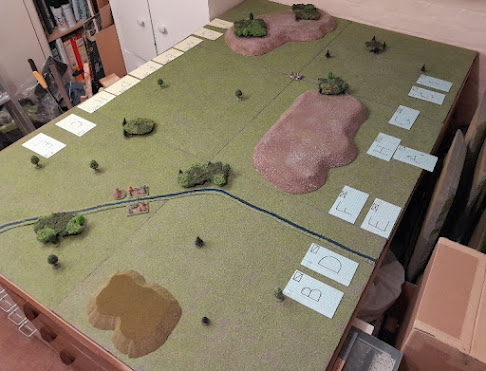 The Austrians quickly moved infantry blinds onto the hill.  Both sides had learned the lessons about using the initiative and moving the blinds.  However the Austrians were enjoying exerting their influence over events.
Both sides were moving cavalry blinds on the flanks.  Whilst their infantry advanced in the centre. 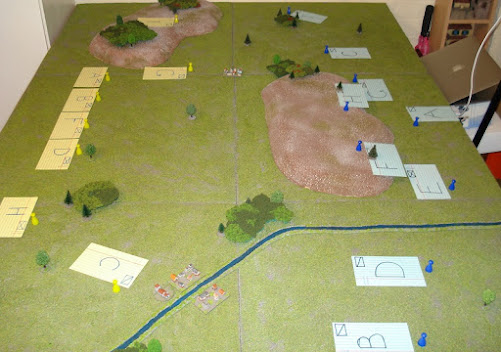 By the end of turn two, French dragoons were crossing the river  in an outflanking move.  The Austrian cavalry blinds were blanks.  How exposed was this going to leave the Austrians in the centre?
On the far flank, the French heavy cavalry brigade found themselves facing two Austrian brigades.  Plus, the French cavalry now found itself in danger of being outflanked.  These brigades were now pinned in position while the rest of the armies continued their manoeuvring. 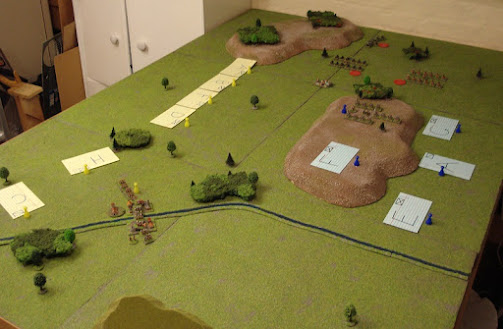 As the French pushed forward in the centre and on the near flank, they became alive to the uncomfortable revelation that the Austrians had more infantry.  The Austrians were, as you can imagine, delighted by the French surprise. 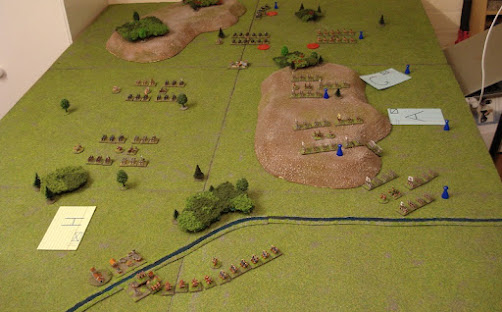 By the end of the manoeuvre phase of the game, the forces were aligned as shown below. 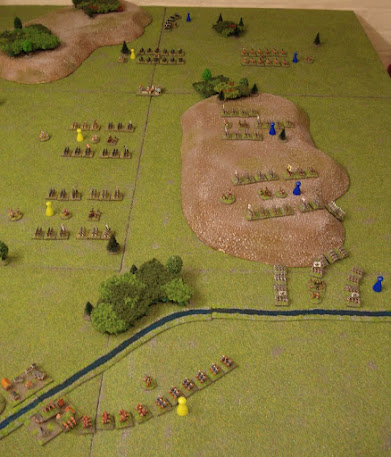 As the two forces sought to take advantage of the initiative, the Austrian infantry established a considerable and solid line on the hill. 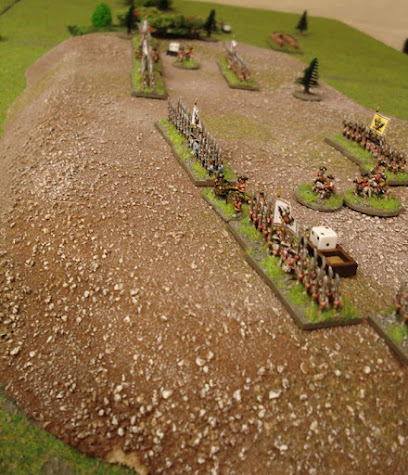 However, the battle was effectively determined by events on the far flank.
Rather than choosing to escape the possibility of being outflanked by the Austrian cavalry, the French cavalry commander instead launched them forward.
This surprised and delighted the Austrians, who at the first instance sent their cavalry into position to charge.

As the charge phase was played out, the Austrians found themselves in control of the initiative and charged first the French rear and then its front.


Inevitably, the French unit was destroyed.
The Austrian cavalry commander now choose to exploit the situation and charged the remaining French horse.  However, in doing so the Austrian cuirassiers were now out of control.

Another Austrian victory.  The French have lost an entire cavalry brigade.  However, there is now a big question mark about whether the Austrians can regain control of their cuirassiers.

At this point the French decide that, with a flank now turned, discretion is the better part of valour and choose to retire.  This decision was based on the idea that if this was a game set within a campaign they would not want to risk more of their army.
So as the battle drew to a conclusion the lines were as shown below. 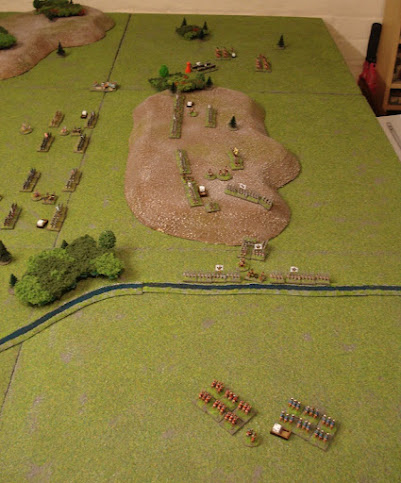 The after game discussion was interesting.  Everyone agreed that they enjoyed the use of blinds.  In particular, they liked having the wider table with the open spaces on the flanks.  All players found that the rules worked well and that they were learning a lot about how to play the armies well with repeated exposure.
One thing that was asked was to include some light troops in another game to see how that plays out.  I will start preparing for that.
One clarification we made for the rules was that blinds cannot move closer than 6 inches and in line of sight, unless line of sight is closer.  Pinned brigades were kept at the 6 inch distance until the end of the manoeuvre phase.  Everyone agreed that this worked well.
The French collapse was an error of judgement.  The cavalry commander should have withdrawn his cavalry to safety in order to maintain the security of the infantry's flanks.  However, he gambled... and lost.
It may seem odd that the battle was determined in one turn of play after the manoeuvre phase.  However, moving the blinds actually turned into a really good game of cat and mouse (or bluff and counter-bluff) deployment.  This was entertaining and satisfying in itself.  Well... at least I found it so!
at September 11, 2022