Wargames Rules No 1 - They Died for Glory

The first in a little series of wargames rules that I use or have enjoyed playing.

In this outing I thought I would start with what I consider my favourite ruleset.  It's not everyone's go to set for the Franco-Prussian War of 1870-71, but for me it has to be They Died for Glory by Dave Waxtel and Robert Burke.

I fell for Franco-Prussian War because I covered it at university, taught it in schools, I love the study of 19th century European history, and from a wargaming perspective am intrigued by the asymmetrical nature of the conflict - French chassepots with the small arms edge, whilst the Prussians can wheel out their superior artillery. 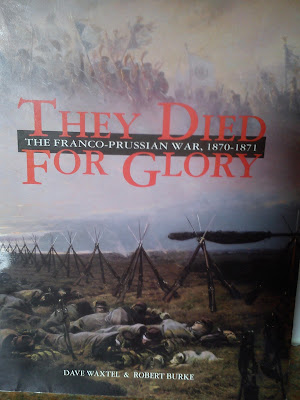 I won't bore you with all the game mechanics but concentrate on why I like them.

First all the order of play means that all players are involved all the time.  Basically an IGOUGO system which also allows the non-moving player to fire at a moving unit at any point in that movement.  But... you have to think because each unit can only do two things in any one turn.  So, if you fire once you can only move once.  Or move twice and not be able to fire.

This firing at a moving player's unit leads to another aspect that, for me, helps with the period feel of the rules.  If a unit suffers 4 casualties it has to go prone.  This nicely reflects the problems for attackers, think of the Prussian assault on St Privat where the guard were stalled by the hail of bullets whizzing their way and driving them down for cover.

This moves nicely into how infantry can be formed both in close and more open formations to deal with the tactical situation.  Again, reflecting our understanding of the developing tactics of the time.

The rules are bloody, and they make for a very hard game for the attacking German armies.  That is why it best to have at least 1.5:1 German to French ratio, or 2:1 if Prussian artillery is not in abundance.  Cavalry is likely to be annihilated if it tries to charge infantry, so treat with care and judiciously.

The French are likely to lose most battles, especially if there is an absence of grenadiers/guards/zouaves who can be threw out in counter-attacks.  But this should not be seen as a negative.  Just think carefully about the victory conditions.  It might be more about the French winning if they can delay an advance for X number of turns rather than the destruction of the opposing army.

A criticism of They Died For Glory is that they don't really have command and control rules.  I've not found this a problem.  Once players are in control, they bring their own friction to the tabletop.  But a quick house rule like, any unit out of command range only has one action unless it rolls its unmodified morale or under for the second action, soon deals with that issue.

The ranges and movement can be quite long (18 inches for a chassepot).  Plus, the game is designed as one unit equals a battalion.  For bigger games (especially on limited space), I reduce one unit to equal one regiment and reduce all movement and ranges by a third, and this works fine.

For links to games that I've put on for the Rejects see the links below.

Give them a go.  With well contrived scenarios, I've yet to have a boring or tight game with these rules.